PMS is the cyclic recurrence of an array of physical, emotional, and behavioral symptoms that afflict an estimated 80 percent of all women during the last week or two of their menstrual cycle. PMS symptoms are caused by an imbalanced fluctuation of hormonal levels and begin approximately seven to ten days before menses and disappear shortly after the menstrual flow begins. In Western medicine, the symptoms of PMS are thought to be triggered by elevated levels of estrogen or the relative lack of progesterone in relation to the level of estrogen. Although most women are generally able to continue with their usual daily activities, by self-medicating or using other coping techniques and home remedies, some ten to twenty percent have symptoms that are incapacitating, greatly distressing their personal and professional life.

The wide ranging symptoms of PMS are quite diverse. Digestive symptoms include indigestion, constipation, or an increased appetite or a craving for sweet or salty foods. Emotional and nervous system signs include poor concentration, moodiness, weeping, irritability or anxiety, anger, depression, and insomnia. Physical changes and pain may appear as breast tenderness, bloating, pelvic pain, cramping, headaches, backache, and weight gain. Seemingly random symptoms, such as a tendency to easily catch colds in the post ovulation phase, palpitations, clumsiness, or acne, may also contribute to the all-over feeling of discomfort and unease. Besides all the various symptoms a woman may experience, PMS can also compromise her fertility due to the hormonal imbalances and overall stress of the body during each menstrual cycle. Elevated stress can prohibit conception by blocking blood flow to the reproductive organs and causing an imbalance in hormonal production, thus resulting irregular menstrual cycles, lack of ovulation, high FSH levels, poor ovarian production, and diminished egg quality. For those women wishing to conceive, relief from PMS symptoms can ultimately lead to improved fertility.

The causes of PMS are:

When women seek Chinese medical treatment for PMS, they are often relieved to hear that their set of symptoms is not viewed as unrelated or random according to Traditional Chinese Medicine. Rather, the symptoms usually occur in a coherent grouping that reveals to the acupuncturist the diagnostic ‘pattern’ of imbalance in the woman’s body that is triggering the premenstrual symptoms. When a woman receives acupuncture and Chinese herbs for these patterns of imbalance, not only do her various premenstrual symptoms improve, but her overall physical health and emotional balance recover, boosting her vitality for life and paving the way for increased fertility.

Acupuncture and Chinese herbal medicine are based on the theory that life energy, or “Qi”, flows throughout the body via energetic pathways, called channels or meridians. When a person is under mental, emotional, or physical stress, the usually free-flowing energy begins to stagnate. To understand this concept, consider what often happens when a person is under stress– their neck and back muscles often tense up. This musculoskeletal tension is an example of “Qi Stagnation” and can actually interfere with nerve stimulation to the arms or legs. The Chinese would consider the person’s neck or back to be “stagnant” while the person’s limbs, lacking in nerve stimulation, would be “deficient.”

The monthly buildup of the uterine endometrial lining, and the hormonal changes a woman experiences before and during her period, are a natural process that is easily inclined to stagnation, particularly at times of stress or life difficulties. The primary energetic imbalance causing PMS is “Liver Qi Stagnation,” meaning a stagnation or congestion of energy in the liver organ and meridian system. The primary cause of this stagnation is stress, causing irritability, depression, breast distention, and premenstrual discomfort. The free flow of Qi (energy) in the body has become compromised, and needs to be released, invigorated, and balanced. Other energetic imbalances may involve the quality and flow of the blood, a substance especially at risk of imbalance in women, due to its vital role over the years in menses and pregnancy. There may also be issues with weakness of the Spleen Qi with a tendency to a quality known as Dampness, which allows for poor digestive strength, bloating, and transient weight gain. The heart channel and organ system is often involved in the emotional liability that accompanies PMS.

Chinese medicine has developed treatment for the many complaints of PMS over the past two thousand years, and recently, the National Institute of Health endorsed acupuncture for the relief of premenstrual pain and discomfort. Treatment and prevention involve the use of acupuncture and Chinese herbs, along with nutritional guidance and lifestyle counseling. For the highest success rate and to bring long-term relief, Chinese medical treatment should ideally be received consistently for a sufficient period of time, traditionally considered to be at least weekly, over the duration of three menstrual cycles, in order to address the body at each stage in the hormonal and energetic process.

Acupuncture: directly removes blockage in the body on an energetic level, in turn stabilizing hormonal fluctuations. It is also renowned for providing deep relaxation and helping calm the mind, relieving the roots of stress. This can result in emotional harmony, and mitigation of the many signs of PMS, such as cramps, breast tenderness, backaches, depression, mood swings, constipation, and bloating.

Chinese Herbs: may improve a woman’s natural hormonal functioning and alleviate depression, due to many herbs phytoestrogenic qualities. Herbs such as vitex, bupleurum, white peony, and black cohosh are used in Chinese herbal formulas to balance hormones and treat Qi stagnation. Vitex is particularly useful for fibrocystic breasts and for menstrual pain due to endometriosis and fibroids.

Nutritional guidance: recommends a program of healthy diet and stress management, including routine exercise to circulate our Qi (energy). Even a regular, daily walk can gradually bring amazing results. Thirty to forty-five minutes of cardiovascular exercise, at least three times per week, improves blood circulation and significantly helps reduce PMS symptoms. Reduced caffeine and alcohol consumption and an organic diet rich in whole grains, vegetables, lean meats, fish, poultry, and fresh fruits will also help balance nutritional and mineral deficiencies that may be leading to additional stress on the body.

Negative emotions also aggravate PMS. Chinese medicine views emotional upset and energetic imbalance as being hand-in-hand. Strong outbursts or smoldering, suppressed feelings disrupt the flow of Qi in the channels that contribute to PMS. Likewise, imbalances such as Liver Qi stagnation trigger emotional tension or depression. Stress disturbs hormonal levels and worsens the symptoms of PMS. Therefore, it is imperative to find ways to reduce stress that may work well for you. Everyday practice in tai chi, yoga, meditation, or just quiet time can help bring emotional and physical equilibrium.

Acupuncture has been widely and successfully used to treat PMS. The three main patterns of PMS in traditional Chinese medicine are presented below, with their differentiating symptoms and the leading herbs and herbal formulas that are commonly prescribed for each pattern. The herb, angelica (Dang Gui) has been widely used by Chinese and Japanese women for centuries. It is well-known for regulating menstrual cycles, eliminating the discomfort of premenstrual syndrome, and relieving menstrual cramps. Even though angelica is widely prescribed, there are more refined combinations of herbs and acupuncture points that are tailored to each pattern.

Liver Qi Stagnation Pattern: Emotional stress contributes to the Liver Qi Stagnation pattern of PMS. Clinical manifestations include: depression and melancholy before the period; propensity to outbursts of anger; moodiness; irritability; anxiety; a feeling of fullness or congestion in the chest; a feeling of distention or pain under the rib cage; muttering to oneself; headache with anxiety; heavy, early periods; thin tongue coating; and a wiry pulse. Many of these symptoms increase before the period and return to normal after the period. Buplerum (Chai Hu) is the leading herb to relieve depression and regulate the Liver Qi. Mood Smooth (Jia Wei Xiao Yao San) and Buplerum Formula (Chai Hu Shu Gan San) are time-tested formulas for this pattern. 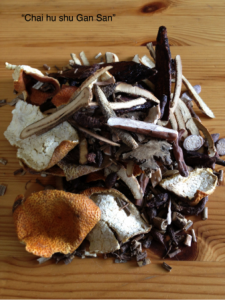 Phlegm-Heat Harassment Pattern: Habitual consumption of hot, spicy or greasy foods or chronic emotional trauma contributes to the Phlegm-Heat pattern of PMS. Symptoms include: anxiety; headache; insomnia before the period; agitation; incoherent speech; red face, bloodshot eyes; a feeling of oppression in the chest; angry outbursts; poor appetite; constipation; red tongue body with a yellow-sticky tongue coating; and a wiry-slippery-rapid pulse. Again, many of these symptoms intensify before the period and return to normal after the period. Pinellia tuber (Ban Xia) is the top herb for resolving phlegm and harmonizing the spleen and stomach. Bamboo shavings (Zhu Ru) are the leading herbs for expelling phlegm from the body and alleviating anxiety. Warming Gallbladder Decoction (Wen Dan Tang) is a leading herbal combination for this pattern.

As we discuss above, Acupuncture and Chinese herbal formulas have been effective to treat PMS and other hormone imbalance disorders. Based on the Chinese medicine Yin/Yang and organ theory, we can specifically analyze one’s body qi mechanism imbalance or insufficient, then the proper treatment will be given based on the etiology and pathological change of individual person.

Other naturally herbal treatments are also included in the following single herbs and supplement: 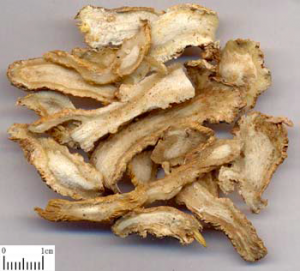